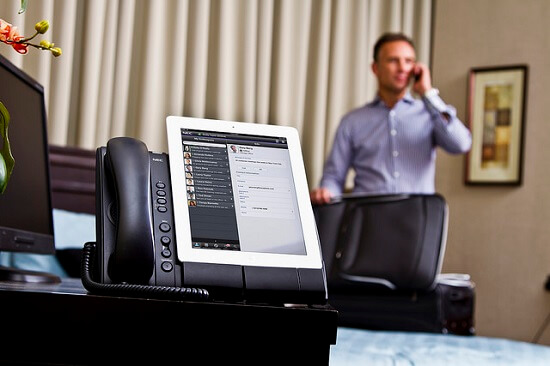 Over recent years the technologies used in communication have rapidly changed and evolved. Organisations are moving away from traditional phone networks to network-based internet communication methods.

Jargon and technical terms abound in this new world of technology and two such terms are VoIP (Voice over Internet Protocol) and Unified Comms (short for communications). These are two of the most popular Internet-based communications method which we discuss and compare in this article.

Before we start comparing the differences it’s helpful to set the scene and broadly describe/define each technology:

Throughout this article, we use the term VoIP this is a widely used abbreviation of Voice over Internet Protocol. This is a relatively recent technology, which is now maturing and uses an organisations network for voice communication.

Reliant on the internet, VoIP solutions replace traditional telephone lines instead using network cables to communicate voice messages. The same telephone equipment as used on traditional phones can be used with VoIP, it’s just the routing method which is different.

As high-speed broadband has gained momentum and costs have reduced more and more organisations have moved to VoIP in what is now an established market. It’s widely accepted that most organisations will achieve sizable cost savings through switching from traditional telephone lines to VoIP.

The main differences between the two technologies

Here we summarise the main differences between VoIP and unified comms:

There are many components of unified comms, it’s these components which make VoIP different. Unified comms can rely on VoIP but is much broader in its reach across the communications infrastructure of an organisation. Here are some unified comms applications:

Cutting through the jargon and the “technospeak” can be tricky at times? Why not call our experts at Shesh Tech, once we understand your requirements we can craft a solution to exactly meet your communication needs. Call us today on 0121 573 0081 or complete our contact form to commence discussions.

IT hints, tips and advice

We post regular content here, offering everything including IT tips, IT tutorials, guides, insights, and IT advice, as well as the latest from ourselves. Be sure to check back regularly to keep yourself ahead of the trends!

how can we help you?

You can find out more about which cookies we are using or switch them off in settings.

This website uses cookies so that we can provide you with the best user experience possible. Cookie information is stored in your browser and performs functions such as recognising you when you return to our website and helping our team to understand which sections of the website you find most interesting and useful.

Strictly Necessary Cookie should be enabled at all times so that we can save your preferences for cookie settings.

If you disable this cookie, we will not be able to save your preferences. This means that every time you visit this website you will need to enable or disable cookies again.

This website uses Google Analytics to collect anonymous information such as the number of visitors to the site, and the most popular pages.

Please enable Strictly Necessary Cookies first so that we can save your preferences!

Please enable Strictly Necessary Cookies first so that we can save your preferences!